Argon the Dog in Brooklyn Park Shows Will to Survive

At Midwest Animal Rescue in Brooklyn Park, there’s lots of dogs with different personalities and stories. But there’s one in particular that staff members say stands out.

Argon is a little scruffy 2-year-old dachshund. He came to the rescue from out of state when he was just a puppy. Argon had contracted parvovirus, a highly contagious and often fatal disease that attacks the intestine. The virus can stay on a surfaces for up to a year and that’s why vaccination is critical for puppies.

Shortly after overcoming parvo, Argon was adopted. But a only a few weeks later, he was sent back to the rescue where Camille Bates began fostering the little guy.

Bates said Argon’s nickname is “Buddy.” The two have a special bond, one that grew stronger as the dog’s pain and suffering increased.

“He’s a survivor,” Bates said of Argon. “He is really truly the unicorn that could.”

As Argon grew, Bates began noticing one of Argon’s front legs wasn’t growing correctly. It caused pain whenever Argon would jump or walk. Bates believed the limb deformity may have been a side effect from parvovirus.

Argon was sent to the University of Minnesota to get his leg repaired, but it was there that vets discovered another issue.

“While we were doing blood work for that surgery, we found out that he had liver issues,” Bates explained.

Argon’s liver issues weren’t causing him any symptoms but his leg caused a lot of pain. Argon’s surgery to repair his leg was a success. But then a wound was discovered on his leg during a routine bandage change where a bone plate was visible. 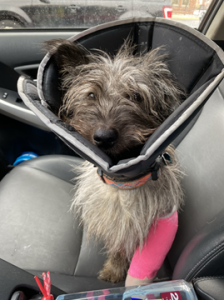 Argon got his leg repaired.

Argon continued to go through a series of unexpected events. In the end, doctors recommended humane euthanasia.

“Every single time somebody possibly counts him out, he looks at them and he goes ‘Nope! I’m not done’,” said Bates.

Bates and Argon took their chances and fought together. With the help of fluids and medication, vets at the U of M and community funding, Argon was able to overcome his tough battles.

When Abigail Maynard heard of Argon’s story, she immediately wanted to adopt him.

“I couldn’t sleep at all. I probably slept like three hours last night,” said Maynard. “I was so excited and anxious, just really wanting to meet him.”

Because Maynard is a veterinarian, she thought she would be a good option for him since he is still healing from his medical issues.

After two years, Argon finally found a forever home. And the hope is that during those final goodbyes, the fighter will know just how much he’s been loved.

“If I’m having a bad day he’s right there. I’m going to miss him,” said Bates as she wiped away tears.