The Brooklyn Park Planning Commission will review an apartment proposal for land that was originally supposed to be a big box retailer.

The proposed 146-unit mixed income apartment complex north of Highway 610 is just west of where a future Twin Cities Orthopedics and Raising Cane’s restaurant will be. The Wickford Village townhomes are located to the east of the property. Enclave Companies submitted plans for the apartment building.

The building would have a mix of units that would include studios up to three-bedroom units. It would also have amenities like a pool and fitness center. 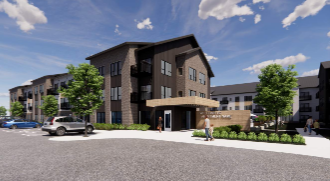 Rendering of Enclave Brooklyn Park submitted for meeting on March 10.

Brooklyn Park has also received a proposal for an office building that would be used for higher education purposed south of the site.

The Brooklyn Park Planning Commission will review the proposal on Wednesday. To read more, click here.