The Anoka-Hennepin School Board voted 5-1 on Monday night against a proposal to rescind the district’s masking requirement. Masking is required in the district for K-6 schools and recommended for grades 7 and up.

Matt Audette, who won election by campaigning to end the masking policy in the state’s largest district, made the motion to rescind. Audette said he doesn’t believe data support that masks stop the spread of COVID. He argued the decision to mask children should be left up to parents.

Other board members disagreed.

“I know that from interactions that I have with our community and the emails I receive, that there are so many people asking for masks in our schools. There are teachers begging for it,” said board member Erin Heers-McArdle.

A couple board members who voted against Audette’s proposal say some parents feel intimidated by anti-maskers who attend the meetings. Monday’s board meeting was interrupted twice by applause from those against masks.

“We now throw our own children under the bus to protect the adults. These kids are really suffering. Debates over vaccines and face masks could on indefinitely. And honestly there’s days where I think they might,” Audette said. 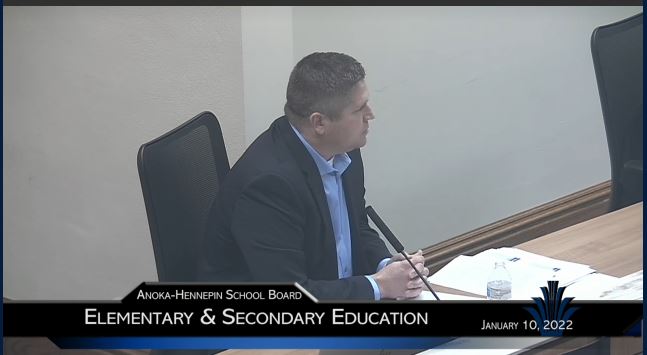 The masking debate comes at a time when the district has seen staff and student absences spike. Anoka-Hennepin Superintendent David Law said 1 in 4 students were out of school Monday at Champlin Park High School. He also said Anoka High School resorted to moving 20 classrooms to the auditorium or cafeteria to supervise students for independent learning due to teachers being out.

According to Jan. 9 data, the district reports 6,606 student absences and 404 teachers out. It’s not clear how many of those students and staff tested positive for COVID-19 due to the prevalence of at-home testing. Law says daily student absences currently average between 9 and 20 percent.

The district follows updated CDC guidance, which recommends people isolate for five days if they test positive for COVID-19. Anoka-Hennepin schools also offer voluntary testing for staff and will continue to distribute at-home testing kits furnished by the state for students.

Robbinsdale, Osseo, Brooklyn Center, Minnetonka and Minneapolis are some districts that shifted to district learning for some or all its sites.