The Brooklyn Park COVID-19 testing center is a pretty popular place these days. CCX News did a story when the location opened in October. People from all over the state frequent the saliva testing center in the Starlite Center off Brooklyn Boulevard.  Minnesota just reached a significant milestone, hitting over 5 million COVID-19 tests statewide, and the Minnesota Department of Health says Brooklyn Park played a crucial role in making that happen.

“Brooklyn Park has been the workhorse for all of our testing sites. By far, the most successful. Over 100,000 thousand tests at that one site,” said Minnesota Department Assistant Commissioner Dan Huff. “They’ve tested more people in Brooklyn Park than anywhere else. “ 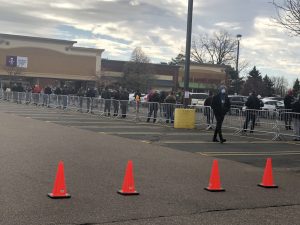 He says there could be several reasons for success. One, the testing location is easy to get to, and two, there’s been vigorous community outreach.

Huff also says testing is vital in helping to stop the spread of the virus because many people are asymptomatic and could accidentally spread it to others.

Minnesota health experts recommend people get tested if they meet one of three criteria:

If you have symptoms.
If you’ve come in contact with someone who has had a positive test.
If you’ve been working outside the home.

The Brooklyn Park, saliva testing site, is open seven days a week, and tests are free for any Minnesotan who wants to take one.