Firefighters responded to 7 garage fires just in the last few months, including one which destroyed a home’s garage and breezeway and had crews from as far away as Rogers working to put it out. Officials say the causes of the fires include faulty electrical wiring, improper use of extension cords and the incorrect storage of batteries. 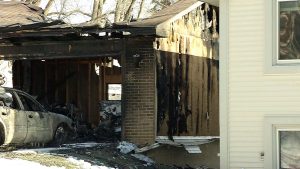 Fire officials say each of the 7 fires were preventable.

“Some fire safety tips for garage fires are keep flammable liquid in a cabinet. Not have excessive amount of storage. Our last fire we had on the 17th, there was stuff all the way up to the ceiling, which is hard to extinguish, let alone put out the fire. It gives it more of a fuel load. Other things are extension chords, not using extension chords,” said Shelby Wolf, West Metro Fire-Rescue Deputy Marshal.

Wolf added that garage fires are often total losses and are likely to spread to other structures, including homes. She said depending on weather conditions, fires can double in size every 15 seconds.