This weekend you can battle the winter blues with laughter at Brookview.

Saturday night you can see Tim Harmston live at Brookview in Golden Valley as part of their Comedy at Brookview series. 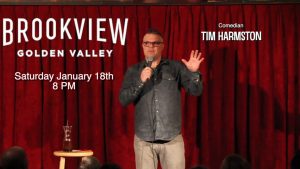 “Well going on Letterman was a big break for me,” said Harmston. “It was a lifetime goal.”

If you haven’t been out to a Comedy Night at Brookview yet, you shouldn’t miss it. They do it up right in the Bassett Creek Banquet room, with full bar service, a nice stage and sound system, table clothes and all the rest of the touches you’d expect a nice club.   Comedians supply the laughs.

“Comedians just want people in a room with a spotlight and a microphone that works. That’s all we want,” said Harmston.

The show starts at 8 p.m. and tickets for Tim Harmston at Brookview can be found online at the Brookview website. You can take your chances at the door but, Comedy at Brookview regularly sells out. So to be assured of a seat getting those tickets online is the best way.