See Charlie Brown, Snoopy and all of the Peanuts gang come to life in an outdoor production of “You’re a Good Man, Charlie Brown” by Stages Theatre Company. The shows are held at the city of Hopkins’ Downtown Park until Aug. 8.

“When you think everyone knows who Charlie Brown is, it’s shocking to find out that young people actually don’t know this character that well,” said Sandy Boren-Barrett, artistic director and CEO of Stages Theatre.

Boren-Barrett says nostalgia from parents combined with the newness for the kids creates a fun perspective.

“The kids this age, the cast members age 12 to 17, they didn’t really grow up with Charlie Brown, beyond maybe Charlie Brown Christmas. They weren’t reading the comics like I was as a kid, or finding them in the newspaper every week,” said Boren-Barrett. 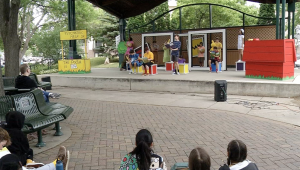 There are two entire casts and each young actor has studied hard to learn the idiosyncrasies of their character.

“I have one cast member who actually said, ‘what is Joe Cool?’ And I said it’s one of the many characters and personas that Snoopy takes on,” said Barrett.

”Snoopy’s always been a character that I’ve looked up to really. The sass, the witty comments. I mean he doesn’t really talk in the cartoons, but it’s still a hilarious role,” said Trader.

Of course Snoopy’s faithful side kick, Woodstock, is always close by.

All of the Peanuts gang is there. And you’ll have no problem identifying who is who because of the expert costuming and props.

“You’re a Good Man, Charlie Brown” is outdoors so, like Linus, bring a blanket, or otherwise camp chairs.

The show runs through Aug. 8.

You cannot buy tickets at the event. But tickets are available on the Stages Theatre website.