One of the themes behind Stages Theatre’s production of “The Dot” is, you never know until you try

Just “make a mark and see where it takes you,” becomes the theme and jumping off point for a whole series of artistic explorations for the main character in Stages Theatre’s original production of “The Dot.” 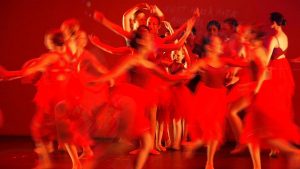 “I think what Vashti learns is about taking risks,” explains said Stages Artistic Director Sandy Boren-Barrett.   “I think that for her, it’s a fear of failure. It’s actually a fear of not doing something well.”

In “The Dot”, Vashti is a young girl who has no confidence in her artistic ability.

“Throughout the story she starts to learn that as she uses her imagination and believes in herself, then she can create wonderful things,” said Emily Huggett who plays Vashti.

The show is filled with lots of color and wonderful projection work, and Huggett seems to really connect with the young audiences.

“They get really excited especially when the projection when all the different things come out. Oh, there’s a fish. There’s a submarine. And I think they just really like all those cool things because they’re surprises and they didn’t know they were coming. And they also really like the dances I think,” said Huggett.

“I think that one of the things that makes this show really unique and actually beautiful is the fact that we fully integrated the idea of dance and interactive projection,” said Boren-Barrett.

The small screen really does not do the show justice. It’s truly a full theater experience.    “The Dot” runs through February 17th in downtown Hopkins.