As you may have guessed Stages Theater Co. won’t be putting on a live performance this Christmas season. In fact there has not been an audience in the Hopkins-based theater since it shut down last spring. So this holiday season, the new show “Twas the Night” will be done virtually.

”It’s an opportunity for a shared experience with families,” said Sandy Boren Barrett, artistic director and CEO at Stages Theatre.

The performance is described as a “virtual fantasy trip.”

“What this is is an out-of-the-box holiday event. So they literally get a box,” said Barrett.

Physically and digitally Stages provides everything you’ll need for the show.

“There’s a no peeking envelope that has some items in it,” said Barrett.

Stages has integrated a stage radio drama with an at-home participation kit allowing children and their parents to immerse in the production.

“It takes place as a current day group of students are writing a paper. And it becomes a radio show. They learn about the golden age of radio. We go back in time. They time travel to that point in the 1940s radio hour,” said Barrett. 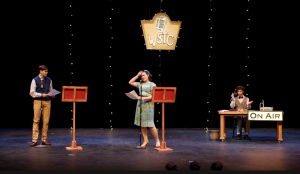 All sorts of surprises are incorporated and …of course…

“You also get to see Santa and his elves. They’re in the production as well,” said Barrett.

The cost for “Twas the Night” is $85, which includes a live story time via Zoom with Santa directly from the North Pole.

“It isn’t just a put your kids in front of the TV and press click. It’s something that they can do together. And I think that’s what families are looking for right now,” said Barrett.