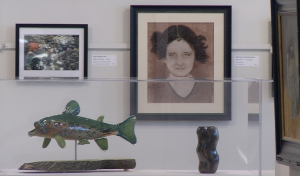 Just looking down the street you’d never know it was the week before Labor Day on the grounds of the Minnesota State Fair.   Still the fine arts building is full of fine art.

More than 1700 pieces were submitted and that’s significantly fewer than the 2700 submitted last year. 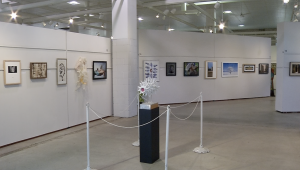 “So we’re down about a thousand works, which is unfortunate, but to be expected during these times. I had expected even fewer submissions than we got,” admitted Clark. 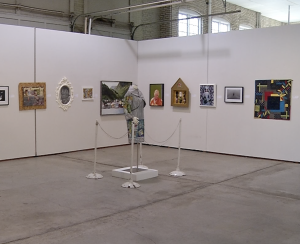 North Hennepin Community College gives out three awards of excellence in the show. One winner is called “Mill City” and is another called “Blueberry 2.”   The third award of excellence from North Hennepin went to a sculpture titled “Henri’s Halloween Hangover”.   Gallery 5004 in Robbinsdale also sponsors their artist exhibition award. This year’s winner was titled “Undiscovered Giants of the Mississippi Headwaters.”

Where to find it. 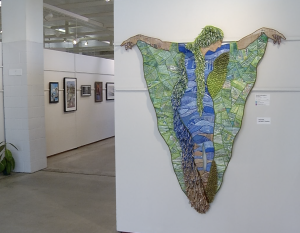 “If they go to MN state fair.org and they go to fine arts on the Minnesota State Fair website. We have available a virtual tour. It’s kind of like a Google street tour where you can point and click and move around the gallery,” said Clark.

The state fair had offered tickets to come see the event, but much like the food parade, they have sold out.   You will find the online information quite extensive.

“We have a photograph of each piece as well as the information from the artist. The name and the title of the work, the medium and also if they provided us with a web presence, there will be their website as well,” said Clark.