Campaign signs can be seen scattered throughout local communities. But this year, signs for Crystal mayoral candidates got a little creative.

Steve Adams, a local business owner, is challenging Mayor Jim Adams. That means voters will be seeing double on their ballots. 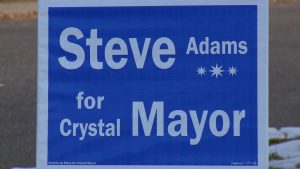 Jim Adams had another tactic to help voters remember him.

“I came up with a catch phrase, a little rhyme that helps differentiate Jim from Steve and I put “Vote Jim not Him”,” Adams said. 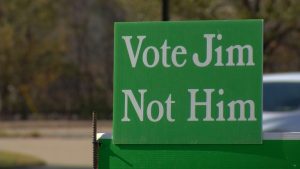 Apart from the candidates first names, they can easily be distinguished by their views, for example, finances.

“Our current mayor absolutely refuses to use bonding and now we’re at the point where bonding is an all time low,” said Steve Adams.

Steve Adams accuses the current mayor of being financially irresponsible by boosting residents’ water bills and property taxes instead of using low-interest bonds to pay for expensive projects.

But Jim Adams says the city’s use of cash instead of bonds helped the city in its response to the pandemic.

“I don’t like using debt. My financial plan is to get rid of debt,” said Jim Adams. “That allows us to have more discretionary income in Crystal and better opportunity to react to unforeseen circumstances.”

Because of their differences, both candidates encourage voters to do research and pay attention to their full name.

“That’s why we emphasized using first names rather than last names,” explained Steve. “Jim has picked that up too and started using that too for his campaign.”