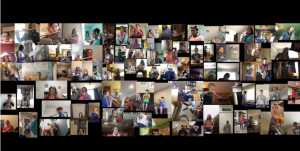 About ninty students orchestrated the sound to “Royal Crown March.” The person behind the big project was Phil Hatchner. Hatchner is the band teacher for Fernbrook, Rice Lake and Elm Creek elementary schools.

Every year students have an end of the year concert. Because performance events were canceled, Hatchner decided to coordinate a virtual concert instead.

“What I had the kids do is I had them play with a reference track,” Hatchner began to explain. “We have a recording that they can listen to and when they play around with the recording, you can line them up and then connect the videos so it will sound like they’re playing as a whole band.”

Students sent their individual clips to Mr. Hatchner. The band teacher then lined up each video file to sync.

CCX asked Hatchner how long it took to complete the project.

“I’ll be honest with you, I don’t even know. I don’t want to know. It was a long time,” Hatchner laughed. 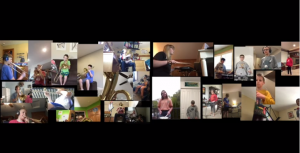 After persevering through technology, families and friends were invited to watch the virtual concert together.

“I think it’s so cool for them to have this final product. This video they can go back and watch,” Hatchner said.

While the virtual band was successful, the elementary teacher said nothing beats hearing the tunes in real life.

“We certainly can make it work but it doesn’t compare to the in-person experience,” Hatchner concluded.