“We’re at this point where we’re putting out mass information with the governors and states help access vaccine. We’ve gotten the money to buy and distribute the vaccines. Now we just have to get people to get the shots in the arm,” said Klobuchar. 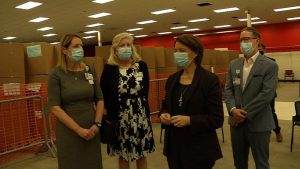 A North Memorial Health patient, Curtis Simmons, also spoke during Monday’s press conference about how he’s been positively impacted by the vaccine.

“Now I’m able to go down to Louisiana to my granddaughter’s graduation. She’s graduating with a bachelors degree in biology,” said Simmons.

The North Memorial Health Brooklyn Center vaccine site has vaccinated more than 25,000 patients as of April 1.