The Show Must Go On: North Hennepin’s Concert Band Gets Creative During COVID-19

Normally practicing four musical pieces would be a light agenda for a North Hennepin Community College concert band session. But due to COVID-19 restrictions and precautions, the band can only rehearse for 30 minutes at a time before the air must be circulated and filtered.

However, the IT department at the school came to the rescue to help the band play together in a neat way. They created a program that allows the band to split up in different rooms and use audio and monitors to play together in real time.

“We all have a passion for music and a need to play it and play together in the same space,” said director David Mantini. “Zoom doesn’t cut it.” 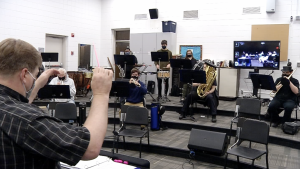 Musicians had to outfit their instruments in masks too. Woodwinds play with a bag surrounding them, so it cuts down on aerosols and brass instruments have bell covers on them.

“It’s tricky because my flute gets caught in the mask,” said Molly Eckhoff, who wears a mask on her face and then has a mask covering her instrument too.

But students and staff say there’s magic in the music and in just being together.

“It’s seeing everybody and it’s a whole lot easier to hear all the parts working together,” said Meredith Grivna, who plays the oboe.

The concert will drop on the North Hennepin website in December. There will not be any live performances, but musicians and the director are thinking about that fact with optimism.

“Anyone with the link can come see us,” said Mantini. “So we have a potential audience of billions.”