A wrong-way driver crash that closed the northbound lanes of Highway 169 in Brooklyn Park Wednesday morning claimed the life of a 22-year-old Minneapolis man. Ahmud Quadir Carrington was the driver of a Chevy Impala headed north when he was struck by the wrong-way driver, the Minnesota State Patrol said.

Authorities say the wrong-way driver was a 28-year-old woman from Lester Prairie. She was driving a Nissan Altima traveling south in the northbound lanes of 169 near County Road 81 in Brooklyn Park shortly after  1 a.m. Wednesday when her vehicle collided with the Impala, authorities said. 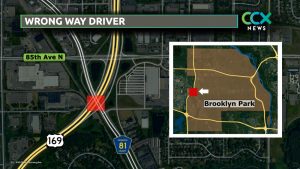 The Altima’s driver and three passengers from the Impala were taken to North Memorial Health Hospital with non-life-threatening injuries. The State Patrol hasn’t released the condition of the Impala’s driver. The State Patrol’s incident report notes that alcohol was involved in the crash.