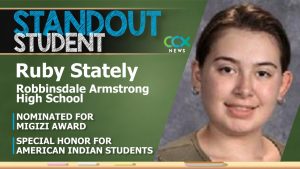 Described by her teachers as a “kind, loving, and caring young woman,” Stately’s winning attitude prompted staff to highly recommend her for the Migizi Award, which is granted to American Indian students in the Robbinsdale School District who demonstrate high academic achievement, participation in extracurricular activities and involvement with the American Indian community.

“Ruby was outstanding,” he remarks. “She modeled behavior of a college student while in the 10th grade.”

Robbinsdale Area Schools’ American Indian educator Athena Cloud agrees, noting that staff she’s talked to says Stately is “an outstanding young woman who demonstrates a significant level of maturity and wisdom.” Cloud says Stately is “always willing to help those who need it and even if they don’t, she encourages them to reach their fullest potential.”

“She is a gentle, compassionate, genuine person who cares deeply about those with whom she interacts,” says Trump. “Ruby is always positive and engaged, whether she is in a classroom setting or a one on one conversation. It is easy to be drawn in by Ruby’s personality and even temperament.”

Stately’s attitude and diligence leave no doubt in her teachers’ minds; this Standout Student will go far.