Mary Kay Olson grew up as a happy, carefree child in Minnesota. She said everything was perfect until the summer of 1980. That’s when Olson was sexually abused by her friend’s brother. She was only 9 years old.

“The thing he told me before I left was, ‘if you ever tell anybody, I’m going to kill you,'” Olson remembered.

That statement left Olson living in fear throughout her childhood. She harbored anger and bitterness for years, even after her abuser died in a car accident.

But in her junior year of college, Olson’s life took a positive turned the channel to the Oprah Winfrey Show.

“So I’m watching and one of the guests said something that literally changed my life. He said ‘to forgive is to set the prisoner free, and then to find out the prisoner is you,'” Olson recalled.

That started the journey to forgiveness. The emotional scars began to peel back. Olson opened up about her story. One day she shared her experience on Oprah’s Instagram.

Thousands responded to Oprah’s Instagram post on how her show impacted them. But only Olson got a phone called to be  part of a documentaries called “Dear.” 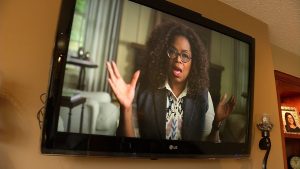 “I go and travel and I speak to women’s groups, youth groups and I share my story.”

By sharing her story, Olson hopes other survivors learn the power of forgiveness.

“I always felt like if I forgave him I was letting him off the hook, but that wasn’t what it was at all,” she said. “It frees their heart from bitterness and anger.”