Robbinsdale police say they caught a break in a series of recent robbery and burglary cases. Not only did they arrest a suspect, but they also recovered some of the stolen property.

For the past two weeks, police have received theft and burglary reports from businesses and homeowners near Highway 100 and France Avenue. Police sent a crime alert to residents, warning them to be on the lookout for a man who they believe was committing crimes while on his bike during the daytime hours. 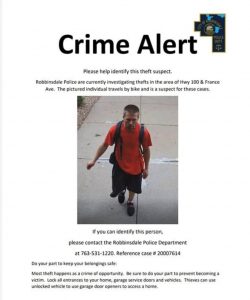 “Our patrol officers saw him while driving around and said, ‘I’m pretty sure that’s the guy from our crime alert,'” said officer Casey Landherr with the Robbinsdale Police Department.

Thursday morning, officers saw the suspect on a bicycle. They were able to locate him with the assistance of one of the public works employees. Officer Landherr says the man tried to run away from police. Officers chased him down in Minneapolis near the 3500 blocks of Washburn and Vincent Avenues. They say he had stolen property and narcotics on him. 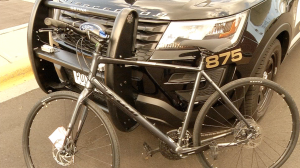 Police found several items at the scene, including new shoes, jewelry, and burglary tools. But police suspect the man took more over the past few weeks.

Authorities expect the suspect to be charged on Friday. The suspect has six active warrants for his arrests. If you believe you were a victim, call Robbinsdale police.