“It’s been a real trip, a real honor for me to direct this group,” Serber said.

Thursday’s event at the Crystal Community Center was the first indoor concert in two years for the band.

“This is also where I had my first concert, so it’s a special way of capping my career with the Robbinsdale City Band,” Serber said.

This was a night of musical classics, and a chance for members of the crowd to honor a leader who lived out his dream.

“I’ve always wanted to be in the city band ever since I was a little kid,” Serber said. 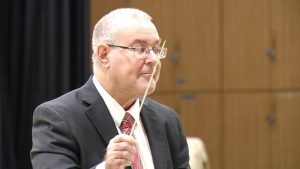 Mike Serber led the Robbinsdale City Band for one last time on Dec. 2.

Serber was only 13 years old when he joined the city band. It was a chance given to him when his older brother invited him to a rehearsal. The invitation came with the condition that he had to memorize all of the music before showing up.

Serber did just that and was asked to join the group.

“At the time, I was the youngest person in the band,” he said.

Serber started out as a trumpet player, then moved on to bass drum, before becoming drum major in the late 70s.

“I’ve always had a real interest in music and my degree is in music education,” he said. “I’ve taught in schools for a few years and I’ve always loved directing music.”

That love for directing music allowed him the opportunity to travel the country and play all over the metro, but it’s the group itself he’ll miss the most.

“We’re a very close-knit group and there have been people who have been with the band 50-40-30 years and we treat each other like family,” Serber said. “We share our joys in life, we share our sorrows in life.”

Life moments combined with a love of music.  A legacy he hopes will carry on strong after he is gone.

“I’m excited to find out what new and exciting ideas he’ll bring to the band,” said Ray Johanneck, the new band director.

Johanneck hopes to carry on Serber’s legacy. He moved to the Twin Cities from northern Minnesota a few months ago.

“The first thing I really want to do is recruit more young people,” Johanneck said. “This band has this really long legacy and I want to continue that.”

Johanneck will get his chance to make his mark. But Thursday night was all about one last hurrah for Serber.

Meanwhile, Serber says it’s been the highlight of his life being with the Robbinsdale City Band, but he is looking forward to his retirement.