Going from A to B was a tricky proposition Tuesday.  A President’s Day storm turned normal travel into a slow commute in the Northwest Suburbs because of snow-packed roads and slick pavement.

“They were horrible,” said Bruce King who drove from Ramsey to Brooklyn Park. “It took me about 40 minutes. Usually it’s about a 20 minute drive.”

“Very bad in the morning,” said Mohammed Omer of Brooklyn Park. “Be careful.”

Drivers tried to cope with highways that resembled skating rinks. The result was a rush hour mess that lasted longer than usual.

“It was slippery,” King said. “I’m sure people had spun off the road and whatever. Causing traffic to back up. Yeah it wasn’t good.”

“I think they didn’t put salt down,” Omer said. “When I tried to brake it was very hard. The car was unbalanced going left and right.” 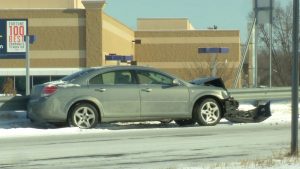 According to the Minnesota State Patrol, between 9:30 pm Monday and 9:30 am Tuesday, there were 208 crashes in Minnesota.

There were 18 injuries, 155 vehicles that spun off the road, and 11 jackknifed semis.

Travel on I-94 was especially slow Monday night. For one semi-truck driver, his trip to the Twin Cities became a marathon journey because of the President’s Day storm.

“I ran into it early,” said Mark, a trucker from Robbinsdale. “I was coming in from Alexandria and hit it about Sauk Center. So I had the bad roads all the way in. It took me close to three hours to do 120 miles.”

Despite the crawling traffic and winter woes, Mark wasn’t complaining about his delayed arrival.

“I’ve been doing it 25 years,” Mark said. “You just slow down. Make sure you keep your eyes open for the people ahead of you. I guess I’m used to it.”