Surveillance video shows the men getting out of their car and then heading to the parking lot area, before committing their crime. They sprayed the sidewalks, exterior walls, doors, and windows near the main and auditorium entrances. 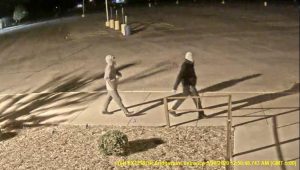 A spokesperson for Osseo Area Schools says the costs to remove the graffiti are estimated to be $1,170.

Chief Mikkelson says the vandals were possibly driving a blue Hyundai Sonata and the occupants of the vehicle both appear to be men. 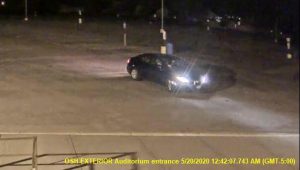 Both men have their hoods pulled up, covering their faces, and both are wearing gloves.

If you have any information, you’re asked to call the Osseo Police Department at (763) 424-5444 or email them at osseopd@ci.osseo.mn.us.