The much anticipated Luce Line Brewing Company in Plymouth is finally open. It’s the first craft brewery in the city.

The brewery sits right off of 16th Avenue North near the Luce Line State Trail. The brewery will share space with Trailhead Cycling, a bike shop based in Champlin.

Co-owners Tim Naumann and Kate Coward say they wanted to create a local brewery that was accessible by bike or a short drive in a car.

“A lot of times, we don’t care to go downtown. We prefer to go farther west. But now that Plymouth has something, it’s nice,” said customer Dave Hardman. 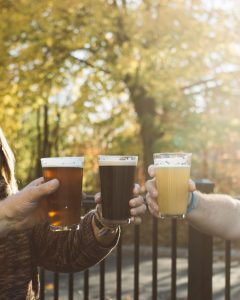 There’s something on the menu for everyone. Luce Line Brewing Company will start out serving six craft beers as well as seltzer. They also have non-alcoholic options.

While the owners are excited to bring a new destination spot to Plymouth, they say opening during a pandemic is challenging.

“I’m always seeking a challenge, but this has been pretty brutal,” said Coward.

After only a few days of business, the brewery will have to shut down on Saturday for four weeks because of new COVID-19 restrictions ordered by Governor Tim Walz on Wednesday. During that time, they can only offer takeout.

“We’re going to figure out ways to bring the taprooms to people’s homes with takeout, curbside delivery,” explained Coward.