Plymouth Residents Get ‘Tricked and Treated’

The Plymouth Parks and Recreation Department launched an event called “Tricked and Treated.” This week staff and volunteers are putting candy on skewers and sticking them in the yards of residents who have signed up, or signed up a neighbor, for the treats. They’ve had a response from 200 people. Each tricked and treated kit costs $20.

“We created it in an effort to bring Halloween to children. When we knew that Halloween wasn’t going to be able to happen this year because of COVID-19,” said Katie Yandell, City of Plymouth Recreation Supervisor. 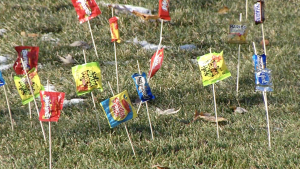 Volunteers helped out taping all the candy to the sticks. It was an all-city effort to deliver the treats.

“We have people from communications, and from parks and forestry, and from the police department, all going out and doing those deliveries. So its not just parks and recreation that are bringing joy to our city of Plymouth residents,” said Yandell.

The city with volunteer help ended up delivering 20,000 pieces of candy attached to sticks in people’s yards. The effort was well received by residents, since it sold out.

“It took many, many, many man hours getting all those pieces of candy stuck to all those sticks. And then of course all of the deliveries. With two hundred people that’s a lot of deliveries, said Yandell. 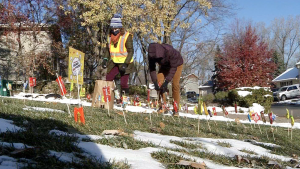 You can keep up with all the things the Plymouth Parks and Rec Department is doing on its web page.