A yearlong investigation into the death of  Crystal resident Jay Boughton is finally over. Prosecutors say Jamal Smith shot and killed Boughton on July 6, 2021, after the drivers disagreed on Highway 169 in Plymouth.

Thursday, Smith was convicted of first-degree intentional murder, second-degree murder during a drive-by shooting, and being a felon in possession of a firearm.

Plymouth Police Chief Erik Fadden says it’s been an emotional rollercoaster for the Boughton family and the men and women trying to solve the case. He says there were also a lot of sleepless nights for police investigating the incident, but the challenging time brought the department closer. 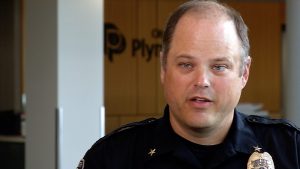 “It’s been very stressful though, especially the beginning stages of the investigation where we spoke with media a lot, and we asked for the public’s help because we didn’t have a lot to go on,” explained Fadden.

The Plymouth police department was determined to bring justice to the Boughton family. Investigators worked around the clock, trying to solve the case.

“It just wasn’t just our few detectives. Our patrol officers, our command staff, our communications staff, within the city of Plymouth, we all spent countless hours just working through every little nuance of this case,” said Fadden.

The chief says Plymouth police breathed a sigh of relief after Thursday’s verdict, but they say this isn’t a time to celebrate.

“No one wins from this. We all had a job to do. Our staff and everybody that was involved in this, they did their job phenomenally well,” said Fadden.

Meanwhile, gratitude from a family who is still grieving the loss of their loved one.

“I never wavered from the Plymouth police finding him. I always knew in my heart they would,” said Kristin Robinson-Boughton, Jay’s wife.

“A big shout out and call out to the Plymouth police department who had just about everybody in that department working so hard on this case, all the overtime, all the hours, all the weekend, they came to our house,” said Stephen Robinson, Jay’s brother-in-law.