Construction will replace the existing Line 3 pipeline. The 1,097-mile pipeline brings tar sands oil from Canada to the United States through North Dakota, northern Minnesota and ending in Superior, Wis.

Kimberly Wilburn, a member of Plymouth Area Indivisible, says the pipeline route will also threaten the livelihoods of certain communities.

“It cuts through indigenous lands, violates treaties,” said Wilburn. “It puts wildlife, water, wile rice crops, all of that at risk. And as we are moving to fossil free and clean energy and carbon neutrality, this is going backwards. And we know pipelines always leak, there’s never been one that hasn’t.” 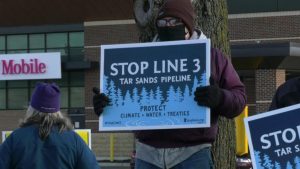 Line 3 protester at corner of Cartway Lane and Plymouth Road in Minnetonka.

According to the Enbridge website, the Line 3 replacement project will create 8,600 Minnesota jobs and add a $2 billion economic boost to the state. The company says “replacing an aging pipeline with new, modern construction is the safest and best option for protecting the environment.”