‘Twas the night before Christmas and all on the shelf not a creature was stirring except Sprinkles the Elf.

“Merry Christmas everybody! Its me, Sprinkles the Elf,” said Sprinkles in a video address to kids.

Sprinkles the Elf is the brainchild of Nicole Fenstad. She began making appearances as Sprinkles about eight years ago and describes the characters as Ms. Claus’ right hand helper. 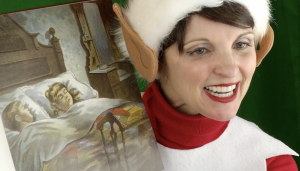 Sprinkles is one of many characters in Fenstad’s entertainment company called Princess Party Pals. She does birthday parties, special events, preschool enrichment, and now online events.  Princess Party Pals has been going strong for 15 years. But up till now all of Sprinkles visits have been in person.

“This was the first time we had to create a new experience and I though what better way than to take kids to the North Pole,” said Fenstad.

All the magic happens in Fenstad’s small studio in the northwest suburbs. Thanks to Christmas magic and a little technology, it becomes Santa’s workshop at the North Pole. And although Sprinkles the Elf is a favorite this time of year, with her extensive collection of props and costumes, Nicole is equipped to bring virtually any princess or fantasy character to your child via virtual visit. 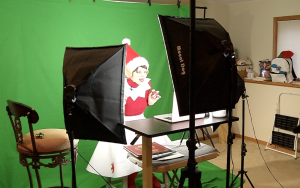 “I feel an extra pressure to grab and hold attention on zoom. I feel like I can command a room better in person. It’s harder on zoom because there’s just so many things I can’t control,” said Fenstad.

Nicole looks forward to a time very soon when she’ll once again be able to provide her fun fantasy visits with children in person.

But for now, Fenstad, Sprinkles, advises children to stay on the nice list.