Thursday afternoon, Governor Walz unveiled a 21-page Safe Learning Plan for how to reopen schools for the 2020-2021 school year.

School districts and charter schools will go with one of three options: in-person learning, distance learning, or a hybrid model. Which route they go will depend on the COVID-19 case count in their respective counties. For schools in Hennepin County, current case rates suggest the hybrid model. But that could change.

Parents at Becker Park in Crystal shared their thoughts on the decision with CCX News.

“I think that’s really smart, and I think also getting the superintendent involved for each school district is very important,” said Brittany Finley, a parent from Fridley. “And just making sure that it’s not a rush on it. Everything needs to be accounted for, and every type of scenario. I think that’s really important and imperative to the students.” 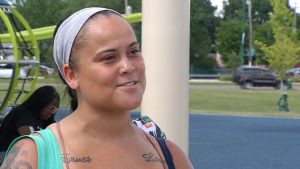 Brittany Finley is a parent from Fridley who also works in the Minneapolis Public School District.

Finley made her way to Becker Park on Thursday with her family to enjoy the splash pad. She’s a parent who also works in the Minneapolis Public School District, and she’s hoping they can go with a hybrid model.

“So maybe like a group go Monday and Tuesday of kids; have the school cleaned Wednesday, and then the other group go Thursday and Friday, and then keep rotating it like that,” Finley said.

Meanwhile, Keith Kieffer, a parent of four from Brooklyn Park, says distance learning this past year was a burden on his family.

“Trying to work and trying to do the distance learning at the same time was not easy,” Kieffer said.

Kieffer’s hope was that all schools would reopen this fall, leaving only the most at-risk at home. When asked his opinion on the governor’s announcement, he had a different take than Finley.

“Well it’s not yet a plan, so I wouldn’t call it that,” he said. “I just say that they’re stating what the options are. So for us, we’re going to send our kids to private school, or at least the oldest one.”

In the coming weeks, school districts will have to make some important decisions on what the future holds for these kids and their parents.

The only certainty is that the pandemic will control what happens.

“I’m not against going back to school,” Finley said. “But I don’t want to rush it and then it all goes downhill.”