A Brooklyn Park store was part of a recent string of paintball vandalism cases.

Fast N Fresh Foods in Brooklyn Park was marked by paint stains earlier this week. The owner of the store said he’s been seeing this kind of activity since last year.

The owner said the paintball attacks have happened during the day and at night, after closing hours. The owner was able to wash off the paint from his store windows but not the walls of the building. 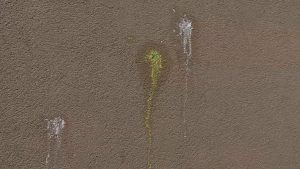 Paintball stains on the building of Fast N Fresh Foods.