It was a Wednesday shortly after the Fourth of July holiday that Erin Hente took a call that would change her life. It was just after 9 a.m. There was an explosion at her husband’s work in Dayton.

Hente learned her husband, Andy, died when the pontoon float he was welding exploded. The date was July 8, 2015. Andy Hente was just 37 years old.

“Andy was a big kid at heart. He loved to skateboard. He loved to ride BMX bikes jumping dirt mounds in his early 20s and still riding halfpipes in his 30s,” Hente said about her husband.

Her grief was unimaginable. She needed help. And she needed support for her kids who were 15, 8 and 5 at the time.

Hente eventually came across Brighter Days Grief Center, a nonprofit in Eden Prairie. It turns out there’s hardly one like it in the country. 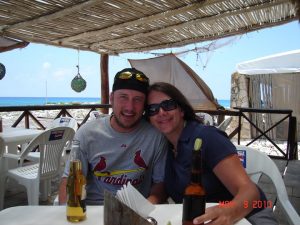 Erin and Andy Hente celebrating their 10th wedding anniversary in 2010

“It’s not just for widows. Anybody that has lost a loved one or is anticipating a loss, they can call up Brighter Days, and it really helps them identify what resources do they need immediately and when they are going to need them,” said Hente. “I have not seen an organization like Brighter Days out there. If it exists I couldn’t find it.”

Brighter Days, founded in 2017, created partnerships with nearly 60 nonprofits in the Twin Cities. It provides grieving family members support in many ways.

“I needed somebody who was just handy and coming to fix things around my house and they helped me find that resource,” said Hente.

During the coronavirus pandemic, Brighter Days formed Facebook groups to help people connect with others with similar circumstances.

“Those support groups have been integral in keeping individuals connected, regardless of whether they’re going through stay-at-home quarantine or they’re just going through their own personal grief journey,” Hente said.

Hearing stories about her husband has helped Hente get through challenging times. She hears many stories about Andy’s love of building and fixing things.

“When he had passed, there were some things he had been working on, neighbors, co-workers, friends of friends of friends, it didn’t matter,” said Hente. “He never would take money from them. He would always refuse. He’d be like ‘no, I wanted to do this.’ It was his personal mission.” 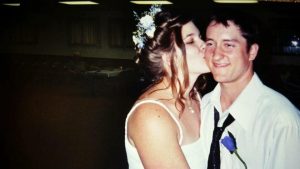 May 27 would have been Erin and Andy Hente’s 20th wedding anniversary.

Hente has many dates and memories ingrained in her mind about her husband. One of them is coming up. May 27 would have been the couple’s 20th wedding anniversary. It led to an idea. Hente made it her mission to raise $20,000 by telling 20 stories in the days leading up to May 27.

“I’ve received endless amounts of Facebook messages from friends, from friends of friends who knew Andy, that have said ‘thank you for sharing this, we really needed this during this time,” she said.

“Just know that all I’m asking is if each person can give just $10, it doesn’t take long before we can reach our goal. I know these are difficult times but those $10 really do (make a difference). It may provide a meal for someone. It could put gas in their car. It can just help them bring a little bit of hope through their day,” said Hente.

Life as a Life Coach

Two years after her husband had passed, Hente decided it was time for a career change. She left her corporate job, eventually realizing she wanted to help people like her. 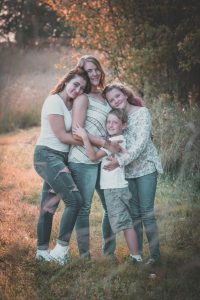 Erin Hente and her three children

“Rediscovering your life after a loss is so significant,” Hente said. “And along my journey, I’ve just had to rediscover all these different things about my identity.”

Hente started a business as a life coach for young widows and volunteers her time with Brighter Days working to expand its reach across the state.

“That organization was exactly in line with my wish, my mission and how I wanted to show and support others along a similar journey,” she said.

As a life coach she has advice for people dealing with grief, especially during these trying times.

“This is an opportunity for us to be able to see what’s right in front of us. And we can only take one step at a time because there’s so much uncertainty, that if we start to look ahead, it can become overwhelming,” she said. “And they can also just acknowledge their emotions. It’s okay to not be okay. It’s alright if you’re having a bad day, and just need to cry alone in your room, or whatever the case might be. Just show up as you are and embrace these moments that are right here in front of you.”