The Osseo Farmers Market kicked off its summer run this week and although it had a steady stream of attendees, its inaugural summer appearance was hampered by a few challenges.

“We were supposed to be having music in the park tonight too. It was a classic big band miniaturized so that we had room on the stage for each person six feet apart. They had to cancel. So when the band cancels, the food truck cancels,” said Dee Bonn, who organized the event for the city of Osseo. “We have a lovely farmers market. And that’s the extent of this evening. Next week now we have the farmers market only, but a movie at nine o’clock.”

But people still turned out to enjoy the first week of the market.

“I grew up in this town, six blocks away. We’ve been around forever. I’ve been doing markets since 62,” said Osseo resident Bruce Smith whose family has roots back to the area’s settlement. 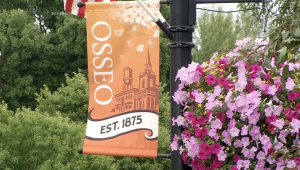 “This is a nice little market. It’s not very big. There’s usually more vendors but it’s actually early to have a lot of stuff.”

Smith says his small farm actually harvested corn last week, which is the earliest he can remember. But Smith says the corn is just part of the reason why people like to shop at the market.

“People come here and they know each other. I like to think of Osseo as kind of like small-town USA. It brings people together,” he said.