People of Islamic, Jewish and Christian faiths all have major holy days during the month of April, the same month when the governor issued a stay-at-home order to slow the spread of COVID-19. Usually people gather together in groups to observe Ramadan, Passover and Easter. We look at how families are observing traditions during a pandemic when isolation is encouraged.

Jews observed Passover starting at sundown April 8. Passover commemorates the liberation of Israelites from Egyptian slavery. One of the main events of the Passover holiday is the seder, a festive meal where family, friends, and sometimes strangers, come together.

The Minnesota Rabbinical Assembly is encouraging people to gather only with those currently under the same roof for the eight-day holiday to help stop the spread of COVID-19. 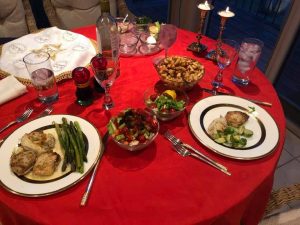 Seder dinner at the Silberman home in Golden Valley

Golden Valley resident Melissa Cohen Silberman and her husband, Sheldon, would generally gather with friends and family. But this year, they held a seder with just the two of them. The couple did, however, include a traditional seder plate, which included symbolic foods.

Melissa says she still cooked the celebratory meal as if she were serving 20 people. After dinner, the two sat on their four-season porch, overlooking a pond, and reflected on the importance of Passover.

“We will remain hopeful and always up.  That’s what this holy season is all about,” she said.

“You don’t need to make up for the seder you are not having, or the seder you wish you could have,” wrote Rabbi Susan Fendrick on their website.  “Do this year’s seder(s) however that works for you this year. Do your best to keep yourself and your family healthy. Connect to the themes of Passover—getting out of narrow places, celebrating life, gratitude, remembering our obligations to each other, and to all others.”

Muslims will observe the holy month of Ramadan starting April 23. The month-long celebration is considered one of the holiest months of the year for Muslims. In Ramadan, Muslims commemorate the revelation of the Qur’an. Muslims fast from food and drink during the daylight hours as a way of learning self-control, gratitude and compassion for those less fortunate.

Masjid Al-Ansar Islamic Community Center in Brooklyn Center had initially planned to hold Friday prayer services at the Brooklyn Center Activity Center during the holiday, while its new mosque was being built. But the gathering has been delayed because of COVID-19.

“One of the greatest responsibilities of Islam is the preservation of life,” said Imam Mohammed Dukuly. “That is the basis on which we suspended Friday prayers.”

Imam Dukuly says instead of gathering to pray at the mosque, people are allowed to pray at home.

During Ramadan, Muslims break fast at the end of the week with a community meal. The Masjid Al-Ansar congregation would often hold these events at North View Middle School in Brooklyn Park. But not this year.

“Sometimes we have 200-300 people coming together, on Saturdays or Sundays to break fast together,” explained Imam Dukuly. “It’s going to be difficult because of the social distancing order.”

The holiest day of the year for Christians also falls during the month of April. Easter, which celebrates the resurrection of Jesus Christ, is April 12, and is often one of the most highly attended church services of the year. The holiday also marks the end of the period of reflection and fasting called Lent. Churches started transferring church and Lenten services to online platforms in mid-March.

“At first, there was a bit of a panic. What do we do and how do we do it,” said Pastor Dan Doerrer from Elim Lutheran Church in Robbinsdale. “The switch from worshipping in the sanctuary to worshiping online was a blessing in disguise.”

Doerrer says people who were not able to get to church regularly suddenly found themselves connecting in a new way through the church’s YouTube Channel.

But connecting in person is still important too. Osseo United Methodist Church put up a low-powered AM radio station and invited people to drive up and stay in their cars to listen to the Palm Sunday service.

“It was so good to wave to somebody and to know they weren’t alone in this. Just seeing people in other cars worshiping was a great encouragement,” said Pastor Wesley Gabel.

Living Word Christian Center in Brooklyn Park invites families to come out on Easter Sunday between 1:30 and 3:30 p.m. to its Easter Drive-Thru Food Drive.

And what about communion?  The Archdiocese of St. Paul and Minneapolis suspended mass in the middle of Lent, but advises Catholics are invited to celebrate mass virtually and make spiritual communion. The archdiocese posted instructions on its website. 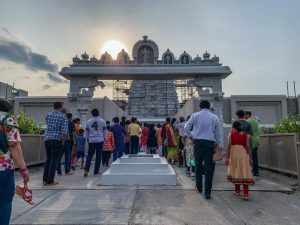 The Hindu Temple of Minnesota in Maple Grove is closed to the public during the governor’s stay-at-home order. The temple is the largest in North America, with more than 40,000 Hindus worshipers. Hindus believe in many gods. Priest Jignesh Joshi says religious services at the temple remain the same, except they don’t have their devotees join them in person. There are several minor Hindu holidays in April.

“It is important for our deities to be worshipped daily. And so, us priests (myself, and five others) continue to perform these rituals,” explained Priest Joshi. “Since we cannot have people attend our prayers in person, we are live-streaming them to the public using a designated website.”

Priest Joshi also says they decided to postpone some of their more significant religious ceremonies until things settle down a bit.

“Hopefully, we are still able to conduct them with our devotees by our side later in the year,” he said.