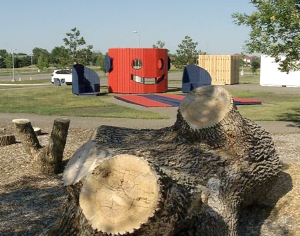 Landmarks are something you can’t help but notice. If you’ve driven down 85th Avenue by the new Brooklyn Park Library you may have noticed a giant, red face smiling at you.

The new installation is the work of Nick Knutson, an artist who grew up in Brooklyn Park.  He drew inspiration for the project from a playground in Central Park that he enjoyed as a child.

“It was a robot slide thing that was just amazing,” remembers Knutson. “It stood about 20 feet tall off the ground and was similar to these colors.”

Knutson took elements of the playground and incorporated it into the artwork.

“What I enjoyed about it was to go up into the robots head, and captured that part of it,” said Knutson. “I took other elements like the slide arms and turned them into seating arrangements. And then having the body be a stage area. It became more of a community engagement area. So you can have performances. You can have social events. It’s open to the public to do whatever.”

This is Knutson’s first public installation. His background is in building and his day job is creating custom displays. He got a grant for this project from Cultivate Bottineau. 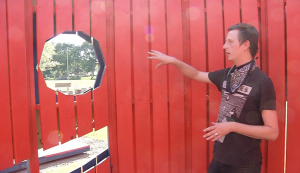 “I’ve never done anything like this before. So it was like, it’s all new to me,” said Knutson.  “To me as an artist growing up here and leaving, that was a piece of identity that I carried with me. It was something I really enjoyed about this city and what made it special to me.”

Knutson hopes the red, smiling face outside of the library will become a landmark. 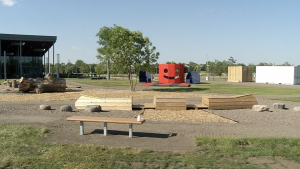 “Since I’ve built it and I’ve driven along 85th Avenue. You’ll drive along and you’ll just see this big, red happy face smiling at you. I think it’s become a great element to this area,” said Knutson.