You can have a “Nature Quest,” a family-friendly scavenger hunt, and help the Three Rivers Park District Foundation at the same time.

“More and more people are starting to know about us because of the work that we’re doing to help remove barriers to access to the parks. But we still have work to do,” said Chris Boyer, executive director of the Three Rivers Park District Foundation.     ”Our mission is connecting everyone to the wonders of our parks.”

Boyer says many communities either don’t have access to parks or utilizing parks is not part of their culture. So, the foundation’s goal is outreach.

For example, the Explorer Program is a mobile nature program that partners with organizations like libraries or recreation centers.

“We bring high quality programming to the people instead of having them come to the park,” said Dre Wakley, an environmental educator with the Three Rivers Park District. “If we’re going to reach youth of color this is the model to do it.”

The foundation has one big fundraiser each summer. This year, the fundraiser is an event called “Nature Quest.” It’s a scavenger hunt that takes place in three parks over three days. The quest is at French Regional Park in Plymouth, Hyland Lake Park Reserve in Bloomington, and Elm Creek Park Reserve in Maple Grove. 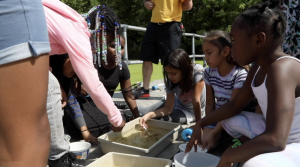 “Proceeds from the event will go to support Explorer programs which serve underrepresented communities,” said Boyer.

To play Nature Quest, you’ll need to register, then download a free app called ‘Goose Chase.’ Then, you’ll get missions that you need to complete. You can join Nature Quest in a team or by yourself. Then, you can go on as few or as many missions as you like.

“Within the app itself is a leader board. And each of those missions has a point value. Some of them that are more difficult, or a little bit more challenging to find something have a higher point value,” said Boyer.

There will be prizes. And each person who signs up will get a wristband. They’ll be able to pick it up at the information tents that will be set up at each of the three parks.