Bassett Creek begins its flow out of the south end of Medicine Lake in Plymouth. Did you ever wonder where it ends up?

The Bassett Creek watershed encompasses 40 square miles and includes parts of most all cities in the northwest metro.   In Plymouth, and Golden Valley we see Bassett Creek meandering through neighborhoods, golf courses, and under roadways. But there is a point after it crosses into Minneapolis that Bassett Creek disappears.   The creek runs through a massive tunnel on its way to the Mississippi right through downtown Minneapolis. The Bassett Creek tunnel even runs right under Target Field on the third base side. 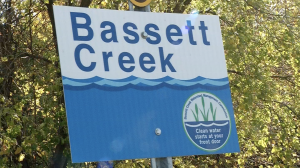 “I don’t think we’ve had the Corps of Engineers draw it down like this in the whole time I’ve been on, which has been a couple of decades,” said Michael Welch, a Minneapolis representative on the Bassett Creek Watershed Commission.

Every once in a while that 1.7 mile long tunnel needs inspection.

“The significance of it is that it gives all of the interested parties which is the commission, the City of Minneapolis, and the Army Corps of Engineers a chance to go up and make sure this tunnel, which is a huge and important piece of infrastructure, is in good shape,” said Welch. 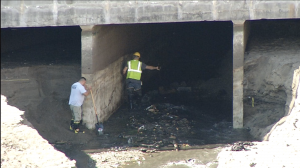 The normal water level in the Mississippi usually completely submerges these tunnels so you wouldn’t even know this was Bassett Creek.

“So by lowering the water, it allows our inspectors to get into the tunnel and walk upstream what is usually submerged,” said Jim Herbert, Vice President of Barr Engineering.

The coordination between various entities to draw the river down this much literally took years of planning.

“So this tunnel mostly follows Second Street up to Third Avenue and then at Third Avenue it transitions to another double box culvert structure. But the interesting feature in there is there’ s a 35 foot drop structure. So we get to the upper part of this tunnel there’s essentially a waterfall in the middle of the city that drops 35 feet,” said Herbert.

The culverts of sand and sediment aren’t a major concern. During a flood event the hydraulic forces generated would blow that material out into the river.   So the next time you’re at Medicine Lake, Wirth Park or even a ball game at Target Field you’ll know exactly where that water in Bassett Creek is going.