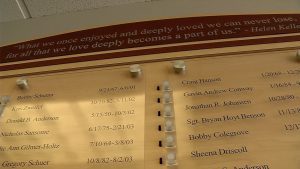 On the eighth floor of a building in Bloomington, there is a solemn place designed to ease the pain of people who lost loved ones to suicide.

Chad Hudrlik says the wall is therapeutic to him. He lost his best friend, Tom Boxell, to suicide in 2004.

So, Hudrlik can stop by the memorial to remember Boxell.

He hopes people, groups and even companies can come together and be part of the cause of suicide prevention. Donations make the memorial possible, but Hudrlik says often companies don’t want to be associated with something as taboo as suicide.

“They can’t get corporations to get involved with it,” says Hudrlik.

But individuals and the SAVE organization actively fundraise for their organization and to put more names on the wall. They know it brings peace.

“We’ve had people that have taken a plane from New York to LA with a layover in Minneapolis. They take a cab to our office just to turn their friend’s name on,” said Dr. Dan Reidenberg, with SAVE.

The second annual “Sing to SAVE Lives” will be at Leopold’s Mississippi Gardens in Brooklyn Park. For more information on the event, click here.

If you or someone you know is at risk of suicide, please call the National Suicide Prevention Lifeline at 1-800-273-8255 or text MN to 74141 to get help. For more information, click here.