A Maple Grove girl is fighting a rare disease in which the immune system attacks bones, causing severe inflammation.

Della Anderson, 8, enjoys playing at the park. It’s a treat the third grader doesn’t take for granted because she knows her situation can change quickly.

“It’s something I couldn’t do last year,” remembered Della.

Last October, Della had severe pain in her back. She also had pain in her wrist, legs, ankles and knees. The next month she had several hospital visits.

Doctors diagnosed Della with a condition known as chronic recurring multifocal osteomyelitis or CRMO. It’s a disorder that causes bone pain due to inflammation in the bones, not caused by an infection.

“It can happen in multiple spots. For her, we saw inflammation first in her spine. So, in several vertebrae, “explained Kevin Anderson, Della’s dad. 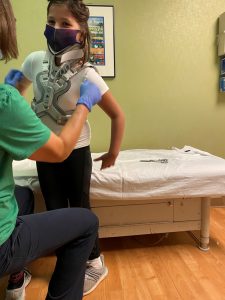 8-year-old Della Anderson is fighting a chronic condition that causes inflammation in the bones.

Della had to wear a back brace for several months, which meant she had to stop doing several activities she loved. She didn’t get to trick-or-treat. She also had to stop taking dance lessons.

Anderson says it was hard watching his daughter suffer.

“You can never prepare yourself to watch your child hurt,” said Anderson. “She’s still going through it, but she’s fine now.”

Della is currently receiving anti-inflammatory medicine, which has allowed her to resume being a normal, active kid. She’s back to dancing, but she takes breaks if her back starts hurting.

Coincidentally, Della’s best friend and neighbor has the same condition.

The two have formed an unbreakable bond. On the first day of MEA, they spent time crafting. Meanwhile, Della is looking forward to getting to celebrate Halloween this year.

“I really want to go trick-or-treating again. I forgot what it felt like,” said Della.

There’s no cure for CRMO. However, doctors say the condition sometimes goes away as children get older.