It’s been a busy 48 hours for Maple Grove firefighters. There were two calls for services, including a three-alarm fire Saturday night at a home near Peony Lane and 92nd Avenue. The fire started at about 11:20 p.m. Saturday. Fire officials say fireworks could be to blame. 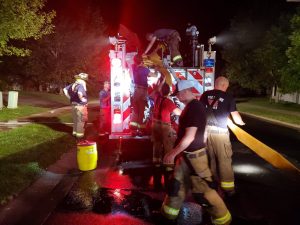 The fire quickly spread, pushing out of the attic and through the roof. Firefighters had to return to the scene several hours later after the fire rekindled.

“Our first crews had to go through an aerial defensive type of attack,” Bush said. 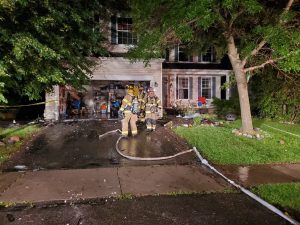 Bush said crews had a tough time dealing with the 90-degree temperatures and high humidity. Three firefighters were taken to the hospital for heat-related illnesses.

“They went to Maple Grove where they were checked.  There was some dehydration involved. Again, when we’re wearing our fire gear, it protects us from the heat, but it also holds in our heat,” said Bush.

On Sunday, at 10:30 a.m., crews were also called out to a fire in the 9900 block of 106th Place. That fire was contained to a single unit. The homeowner noticed smoke and was able to use a fire extinguisher to help slow the flames.

Fire investigators are trying to determine a cause. No one was hurt in this fire.