A project that’s being hailed as the “crown jewel of Maple Grove” took another step toward completion this week.

As CCX News previously reported, the Minnesota Health Village project in Maple Grove plans to bring a multi-use community to the area near Maple Grove Hospital. An animation provided by developer Ryan Companies shows what it might look like. The plan calls for apartments, offices, medical clinics and retail space. The hospital would serve as the site’s anchor. 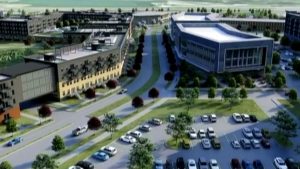 Tuesday, the Maple Grove City Council approved the conceptual plan. That means the city will start planning for access roads to the property.

Officials say construction on those could begin as early as this summer. The hospital is also expected to bring plans for its own expansion, which will include a parking lot to be built on the Minnesota Health Village site.