COVID-19 Restrictions Cause Taprooms to Run Dry on Revenue

Running a taproom without customers allowed to sit inside and purchase what’s on tap is, well, tapping out revenues.

Nobody knows that better than Mike Campbell, who owns Blue Wolf Brewing Company in Brooklyn Park. Because of the pandemic, Blue Wolf is struggling to stay afloat.

“We definitely have less business than we normally do,” Campbell said. “It’s not the financial situation you want to get yourself into. But you do what you can and we’ve had great support from the folks in our community coming out and buying growlers and prowlers as they are allowed to.”

Taprooms have resorted to selling growlers, usually 64-ounce jugs made of glass. Prowlers are same size but are jugs made of plastic.

Campbell has talked to several of his cohorts in the industry and they tell him business is down 25 to 50 percent. He’s furloughed his staff and only he and his wife are working and they shut down production for almost a month. 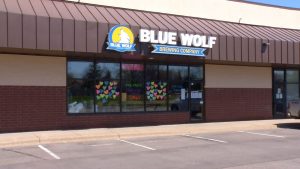 Meanwhile at the state Capitol, Minnesota lawmakers have voiced concern about the future of taprooms too.

The Minnesota Craft Brewers Guild, which represents 150 taprooms around the state, says it’s a matter of months, if not weeks, before they’ll have to close if there isn’t intervention by the state.

“Half our members tell us that with the substantial decrease of on-premise and distributed draught sales, they have less than six months to go before they’ll have to shut down entirely,” said Lauren Bennett McGinty with the Guild. “Fifteen percent of respondents anticipate they will close forever within the next four weeks.”

Bennett McGinty says many craft breweries reported a large reduction in staff, including 51 percent of full-time employees now furloughed. Before the stay-at-home restrictions were put in place, Minnesota craft breweries employed more than 4,500 individuals, she said.

With many taprooms in survival mode, Hoffman believes it’s time to prop them up so they can stay afloat.

“Based on the data, two-thirds might not make it through this,” Hoffman said. “That’s the notice that I’ve seen. They might exist like Mike Campbell says about a month left and then he’s hurting. I know lots of them are hurting. One of the breweries in Minneapolis had to pour out on the 21st a whole bunch of beer that they had.”