A global pandemic isn’t stopping volunteers from doing what they do best. Volunteer organizations across the metro say it took some creativity to resume serving the community.

The Maple Grove Lions Club continues to focus on its mission by fundraising in different ways. 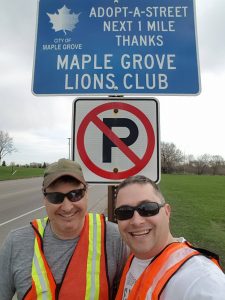 “We’re doing a virtual half marathon race. It’s a race that we’ve done 13 years and now we’ve switched to a virtual race and expanded it to include bicycles,” said John Beacham, the club’s president.

Beacham said while big events like Maple Grove Days had to be canceled, volunteers are keeping a close eye on the pandemic guidance to make decisions on future events.

The club meets twice a month on Zoom and members are trying to come up with creative ways to fundraise during the pandemic.

“We typically fundraise in the community through charitable means and the other in non-charitable means, so like pancake breakfasts and things like that,” Beacham said.

“It’s a little awkward because you’re in a club of 70 people where voices are typically heard. We follow different rules and online etiquette, everyone’s doing well,” Beacham said.

He added that they’re focused on staying together through Zoom, especially because people are looking and yearning for social interactions. 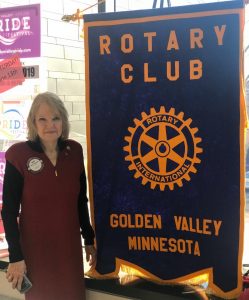 “We have some amazing presentations we see every week from different members. We’re recording those because it’s all virtual,” said Anderson. “Even when we’re back together, we’re going to want to find a way to record because it’s so nice to have those archives.”

Anderson said the club has a service project once a month. One project coming up includes surprising PRISM, a Golden Valley-based social service agency, with dental hygiene kits. Because members aren’t able to assemble the kits together in person, they developed a different plan.

“We’re going to assemble our kits at home and then return them so they can be quarantined for a certain number of days and then be given over to PRISM,” explained Anderson.

Anderson also said they recently selected their ‘rotarian of the year’ and ‘citizen of the year.’ Traditionally there would be a big award ceremony. However, Anderson said club members will discuss another way to honor and elevate those individuals without gathering.

Members of Toastmasters International say going virtual has its challenges, especially when it comes to critiquing speeches. 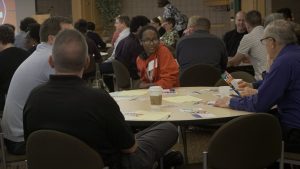 “The biggest challenge for us is to encourage people to come in,” said Bob Dummer, area director for District 106 Toastmasters. “The primary motivator for most people is they want to improve their communication and get over the fear of standing up in front of a group and talking. Because of the switch to virtual, you take away that pressure to a point.”

Toastmasters is a nonprofit dedicated to help people overcome their fears of speaking through practical applications and a series of speeches.

Dummer said he gave his first virtual speech in 18 years. One of his feedbacks was not having good eye contact.

“I’m not looking at an audience, I’m suppose to look at a camera so it was good feedback for me,” Dummer said.

He added that virtual speaking gets members comfortable talking to a camera which will help them stand out when they’re in corporate meetings, even with customers or colleagues.

But this isn’t the first time Toastmasters has considered going virtual.

“Our year starts in July. We had two clubs that were exploring possibilities for going virtual because they had a number of members that were not located in a specific geographic area,” Dummer explained.

“There was a lot of resistance with going online, saying ‘I’m not tech savvy enough,'” said Sarah Tarleton, program director for RSVP.

RSVP teaches evidence-based classes including wellness classes. Prior to the pandemic, wellness classes were held throughout Minnesota usually in schools, senior centers and churches. Now seniors are having to exercise through a screen. 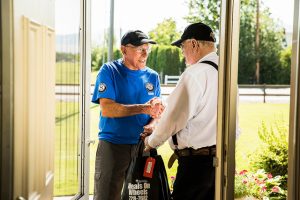 “We have over 14 classes, we’re already on our eighth one,” said Tarleton. “More than half have gotten online. My coordinator, she’s so patient. She has handheld a lot of folks with Zoom and getting everybody up, feed it and going live.”

Tarleton said because seniors have learned to use Zoom through RSVP, they’re now also able to use it to bond with their loved ones.

“I think it’s ended up enhancing participants’ lives because other people are doing it too, so because of this, they can connect with families and friends,” said Tarleton.