Huldah Hiltsley didn’t set out to potentially make history. But come November, Hiltsley could become the first Black woman ever elected to the Minnesota Senate.

“Can you imagine, 164 years, and we’ve never had a Black woman into our Senate,” said Hiltsley.

The 21-year Brooklyn Center resident was seeking the DFL nomination for Senate District 38. No endorsement was given at a recent DFL endorsing convention.

Hiltsley will run in an August primary against Brooklyn Park City Council member Susan Pha, the first person of color ever elected to serve on the council in that city.

In addition, Maple Grove resident Farhio Khalif, a Somali refugee and community activist, won the DFL endorsement this past weekend for the newly redrawn Senate District 37. She is expected to face longtime Republican Sen. Warren Limmer.

Experts say this new wave of political candidates shows women of color are not content to be on the sidelines anymore.

Hiltsley says she’s proud to be a part of our changing political landscape. 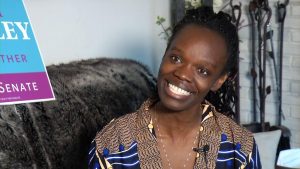