Teachers and staff members set up a parade route for students of Good Shepherd School in Golden Valley on Friday morning. Parents could drive students through the parking lot where teachers stood and waved. 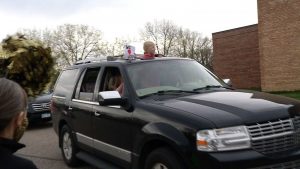 Students and teachers wave to one another in a morning parade at Good Shepherd School in Golden Valley.

“We have just missed our kids so much,” said Angie Ruehle, who teaches second grade at Good Shepherd. “We wanted a chance to see them and have them see us.”

So, they organized a parade and passed out doughnuts from Valley Pastries to students. Teachers, principals, aides and staff all participated. There were pom-poms, cowbells, and dancing.

Ruehle says students and teachers have missed one another.

“We’ve done some calls where we can see each other, but it’s not the same as seeing them in person,” said Ruehle.

You can learn more about Good Shepherd School here.