The aftermath of George Floyd’s death urged a Golden Valley woman to make a difference through charity.

When Megan Kelly Hubbell turned the channel and saw buildings in downtown Minneapolis go up to flames she felt the drive to do something. 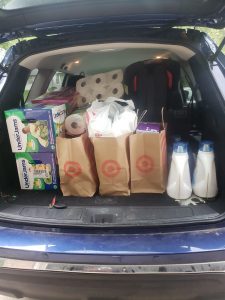 “I thought, I’m here safe in Golden Valley, I can’t just sit here anymore and do nothing,” Hubbell explained.

Hubbell decided to post on Facebook to see if anyone was willing to bring donations over. Hubbell also accepted monetary donations to buy groceries for families.

By the morning, Hubbell received more than $1,000. In just a week and a half, Hubbell filled six van loads and eight car loads of items and raised over $3,000. 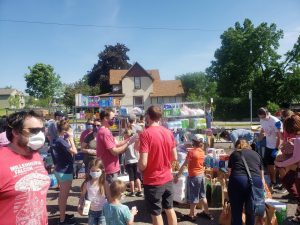 Donations dropped off at Agape Oasis in Minneapolis

“I’d send messages to people for paper bags because I was going to run out. I had a team over here, we were stuffing paper bags, three people out shopping,” she explained.

A colleague of Hubbell’s from CLIMB Theater contacted her to lend her a van so she could transport the donations collected. CLIMB is also collecting donations.

“It’s literally the least that I can do to help the people that are suffering so much,” Hubbell said.

She added that it takes a village to help families in need.

“You gotta build each other up. You gotta stick together and be ready to be uncomfortable,” Hubbell said. “That is the way forward.”