The Golden Valley Police Department has waded into the middle of a raging national and international debate over issues ranging from government surveillance of citizens to equal treatment of women and people of color under the law.

A week ago, Friday, July 10, officers from the Golden Valley Police Department and Minneapolis Park Police questioned sunbathers at an unofficial beach just west of Theodore Wirth Park known for being clothing-optional.

According to the city, officers spoke with eight people about whether they had been naked or topless on the beach. Those questioned pointed out that they were, in fact, wearing tops. That’s where the controversy began, as officers then said their camera drone had captured footage of the people in question with their clothing on. In a video of the confrontation, one beach-goer accused police of racially profiling her and other people of color in their enforcement of public nudity laws.

The city responded with a statement defending police actions, saying the beach has been problematic for decades.

“The beach has been the location of sexual assaults and other sexual activities, a substance-related drowning, an accident resulting in paralysis, and drunk driving and narcotics arrests,” the city wrote, adding that police have written 40 tickets at the beach for “violations including indecent exposure, consuming alcoholic beverages, and after-hours park usage.”

The city says the goal is to keep the beach safe for everyone.

The city also emphasized that of the eight people it says were questioned, only two were not white. Mayor Shep Harris went further, saying the beach is a “magnet for violence” and crimes such as public urination in people’s yards, spray-painted graffiti, and dangerous driving, and that the Minneapolis Park Board needs to act. While the beach is in the Golden Valley city limits, management of the Theodore Wirth Park area falls under the Park Board’s authority.

“The fact is, the Minneapolis Park and Recreation Board has intentionally ignored their responsibility for years,” said Harris, who felt the Park Board needs to “either shut the beach down in its entirety because right now it shouldn’t be there, period, or they need to make it an official beach and enforce normal beach rules.”

Harris says social media has also taken the story out of context.

“It’s more than topless,” he said noting the drone captured video of people who were completely nude.

But at least one beach-goer says the city’s account is not entirely accurate. Liza Demyanov was there Friday as police arrived. She says she and her friends go there regularly to soak up some rays and hang out with people in what she calls a “peaceful place.” But that peace was disturbed for Demyanov when a friend said she was leaving because she’d heard a drone and was uncomfortable. 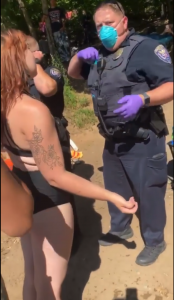 A police officer questions a beach-goer in Theodore Wirth Park.

“Maybe 20 minutes after that another girl ran through the beach saying the cops were coming,” said Demyanov. “So everyone that was topless or nude put on their clothes. Alcohol consumption was put away.” When police arrived, Demyanov didn’t understand why they were asking people about being naked.

“The reason I got upset,” said Demyanov, “was that my friends started getting citations for being topless, but they were clearly wearing tops.”

That’s when one officer explained that the drone belonged to the city, and police had been watching the beach with it. Demyanov feels using a drone to catch beach nudity isn’t an appropriate use of police resources.

“Without consent, just for the purpose of targeting people just to give them tickets for displaying nipples? I’m not OK with that.”

Demyanov also disputes the city’s accounting of who was targeted for questioning.

“I saw them talk to about five people, maybe six.”

She says only two of the people police talked to, including herself, were white. That’s a claim Mayor Harris emphatically denies.

“There were eight people who were asked for their contact information. Of those eight people, six were white. Two were people of color. And of that eight, only three are actually going to get tickets.”

Two of those getting tickets are described as males who were completely nude in front of children.

And Demyanov disagrees with the city’s crime assessment of the beach. She says in the three years she’s been going there, she’s never seen anyone urinate in someone’s yard, and says the only graffiti she’s seen is on a stone wall at the beach, which has been there since she started attending. Although she mostly attends during the day and not at night when many of those incidents are purported to happen, she says she doesn’t believe that either.

“I don’t think it happens at all, because I would at least see graffiti.”

Making the controversy of police surveillance and enforcement in parks even more complicated is the idea of equal treatment of women under the law. Demyanov points out that this event highlights “that conversation of whether or not women don’t have the right to go topless when men do.”

And although, according to Harris, none of the women present will receive tickets even if cops took their information – the third citation will go to a male for possession of alcohol in a park – the matter of the appropriateness of questioning women for doing something that is legal for men to do is one of contention for Demyanov.

And, in fact, that’s an issue that’s coincidentally being addressed by the Minneapolis Parks and Recreation board. This past Wednesday the Park Board’s Administration and Finance Committee voted to change a parks ordinance that makes it illegal for someone to expose their “female breast below the top of the areola,” but does not forbid men from shedding their shirts.

The move would bring park ordinances into alignment with city ordinances, which already allow people of any gender to be shirtless in public. That ordinance change is due for a public hearing before the full board in August.

Regardless of the board’s decision in the matter, the fight over the unofficial Wirth Park beach will continue. Beach-goers like Demyanov say the beach is a safe place full of people who just want to hang out and “do whatever they want.”

The city says it’s a crime-magnet that’s dangerous and needs to be dealt with. And there’s no sign that either side is budging in its assessment. But according to Harris, one thing is certain – the city has no plans to stop using drones to catch people breaking the law.

“The police did a good job of trying to use a strategy that was non-invasive,” he said adding “as of right now, we’re not re-evaluating the strategy of using drones.”