A Golden Valley man is charged with assault after allegedly hitting a woman with a metal baton in what police describe as an act of road rage.

Joseph Blanks-Humbeutel, 40, of Golden Valley is charged with second-degree assault.

A woman pulled up behind a silver vehicle with duct tape on the bumper at a stop sign near Lilac Drive North at around 3 p.m. Monday. The woman honked her horn because the vehicle “remained stopped for a long time.” The driver of the silver vehicle moved, but then stopped behind the woman who had parked at an office building in the 1400 block of Lilac Drive North. The man got out of his car and told the woman he would “teach her a lesson.”

Police later arrested Blanks-Humbeutel with the help of witness video that identified the license plate of his vehicle. The suspect later told police he was “acting in self-defense” and the alleged victim made “hostile gestures” at him. 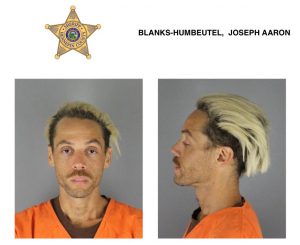 If convicted, Blanks-Humbeutel faces up to seven years in prison for the assault charge.

The woman has bruises on her knee and leg, but is expected to be okay.