Jumping worms, native to East Asia, are bad news for Minnesota soils. Not only do they eat away the roots of plants like hosta, but they destroy the top two inches of soil, which makes soil easier to erode.

Dr. Lee Frelich, head of the Center for Forest Ecology at the University of Minnesota, has been tracking these creatures for some time.

“About 15 years ago I would say when some of them appeared in Loring Park and they killed a bunch of hostas in the garden there,” said Frelich. “I saw those hostas sitting there and you could just touch em and pick em up. It turns out they weren’t connected to the ground because these jumping worms had all gathered on their roots and eaten parts of the roots.”

Jumping worms get their name from their violent wiggling and snake-like moving when they’re disturbed. Experts say the are voracious consumers and will destroy the top two inches of soils they inhabit, turning the soil into something that resembles coffee grounds.

“We are very much worried because they turn soils into very loose granular materials. So when you step on those loose soils perturbed by jumping worms then you are very much more likely to cause soil erosion,” said Kyungsoo Yoo, a professor of Soil Water and Climate at the University of Minnesota.   Yoo says if these worms get into Minnesota’s forests they could have a devastating effect. 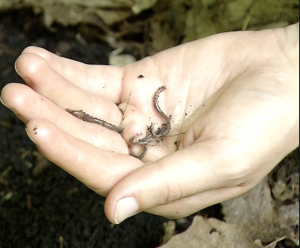 Jumping worms have begun popping up across Minnesota. They are, in part, spread through community mulch piles.

Tyler Baumann is part of the first University of Minnesota study on jumping worms. Baumann, a graduate student, is conducting research at the Minnesota Landscape Arboretum.

The good news is jumping worms only live in the top two inches of soils and can’t survive Minnesota winters. The bad news is that they lay eggs that can withstand the winter and hatch in the spring.

“They’re spreading through the widespread distribution and redistribution of mulch that happens in the community of gardeners in Minnesota,” said Frelich.

Frelich says be wary of community mulch, but you’re safe with mulches from reputable garden stores.

“Most of the really high quality commercial mulches are brought up to a high enough temperature to kill the worms and the eggs which are in the little cocoons that they lay,” said Frelich.

If you do use community mulch, Frelich says you have to get it hot enough to kill anything that might be inside the bags.

“You’d have to bring it up to temperature of like 110 degrees. To do that you could put it in the sun with plastic sheeting,” said Frelich.

With our summer temperatures lately, garden mulch spread out on blacktop first and covered for a couple hours in the heat of the day could be enough to spell the demise of jumping worms before you spread it in your garden or flower bed.

The University of Minnesota is beginning to do research on the worms effects in Minnesota. And the Minnesota DNR is following this invasive species closely.