The view outside your window Monday morning was nothing short of magical. Frost-coated plants and trees dominated the landscape across the Northwest suburbs including at the Eastman Nature Center in Maple Grove, thanks to special overnight weather. 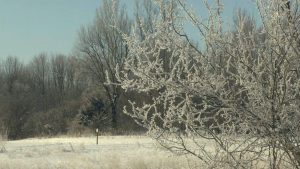 Whether frost or soft rime, the result was spectacular. The soft rime was created by fog mixed with cold temperatures that dipped into the single digits. The result was a winter wonderland scene in the Twin Cities.

“It was so pretty,” said Jen Summe of Corcoran. “I took lots of pictures. My husband’s out of town right now so I took a bunch of pictures to send to him.”

“Oh it’s beautiful,” Baker said. “You can see all the little ice crystals that have formed and it’s really amazing. It’s a really cool weather phenomena we can see at our level. Normally this stuff’s happening way up in the atmosphere.”