Family Moves to Brooklyn Park from Roseau, in Search of More Diversity

When Kate Lundquist drove her family six hours from Roseau to the George Floyd memorial site in Minneapolis, she wasn’t sure what they would find. Lundquist and her six kids noticed things they wouldn’t normally see at their northern Minnesota home. During the June trip, the children saw buildings higher than three stories, houses that were close together and graffiti. 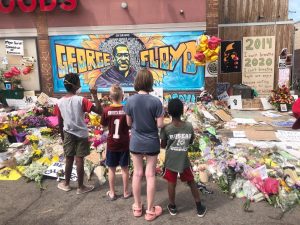 “They would ask me ‘mom why is there paint on the wall? Why would anybody do that?’ They don’t understand,” said Lundquist.

Lundquist would have to explain that the paint on the wall is a way for some people to voice their pain and expression. Her kids also asked about the phrase “I can’t breath.” For Lundquist, the trip became eye opening in other ways too.

“When you are the mother of some of the only black children, and you know that every town has misunderstandings and refusal to listen and learn, you start to get a little scared,” Lundquist said about life Roseau, which is minutes away from the Canadian border.

Of Lundquist’s six kids, two of them, Nelson and Maki, were adopted from Haiti. They are among the few black kids in Roseau. It was during that trip that her family decided to move.

A Move to Brooklyn Park

At the Floyd memorial site, Lundquist watched her son, Nelson, walk into the crowd and blend in. 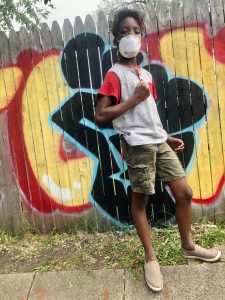 “I noticed that when I took his picture he had his chin a little higher and his shoulders were a little more back, and when he posed he went like this,” said Lundquist as she made the Black Lives Matter fist.

Lundquist swears her son stood taller in every way as his heart grew with compassion. After seeing the transformation the memorial site had on her family, Lundquist knew it was time for a move. They then purchased a home in Brooklyn Park.

“It’s about giving my children a worldview that’s healthy and real and where my boys won’t be the only black children in class,” she said.

After 16 years of northern Minnesota living, Kate said the family is looking forward to the change.

“I hope (Brooklyn Park) people feel a sense of like ‘huh we do have something special.’ I’m really excited,” said Lundquist.