Every day the Minnesota Department of Health releases the numbers of people who have contracted COVID-19 and died from the virus. Most of the cases are impacting people living in long-term care facilities.  It’s easy to become numb to those numbers. However each one represents a family. Each has a story.

On May 17, Ellen Rockwood Hunt passed away peacefully at Brookdale Plymouth, a long-term care facility in Plymouth. She was 84 years old. Hunt is survived by her three children, Ray, Annie and Beth Hunt. 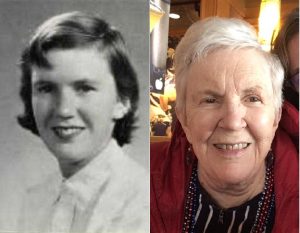 84-year-old Ellen Hunt passed away at Brookdale Plymouth. Her family says she had complications from COVID-19.

“Your parents are your pillar. I think my two siblings and I are a bit surprised at how significant that is, that there is a sudden shift where you realize that your foundation isn’t there,” said Beth Hunt, the youngest of the three siblings. “I view it as there was a solid girder regardless of the intra-family challenges, of course, that we all have.” 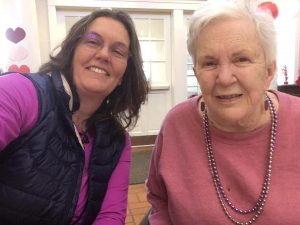 Beth and her mother, Ellen Hunt.

Ellen grew up in Worcester, Mass., and liked to spend summers in Cape Cod. She was a very good athlete. Ellen was captain of the field hockey, basketball, and tennis teams in high school. She’s also a former teen New England tennis champion.

“Later in life, she was more into playing for fun. She played through her 50s,” said Beth. 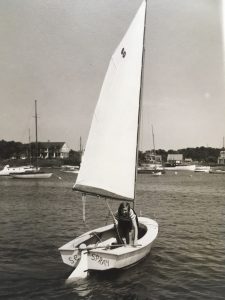 Ellen Hunt sailing when she was a teen. Photo courtesy: Beth Hunt.

Ellen also liked to ski and sail. She frequently sailed to the Elizabeth Islands in Buzzards Bay.

“We did all those things as a family when I was younger. She loved to surf,” said her daughter.

Beth Hunt says her mom was also into spiritual well-being. Ellen was one of the early transcendental meditation enthusiasts, later becoming a teacher of the practice. She says her mom was a free-thinker that often didn’t follow the norm.

“They treated her incredibly well, and the staff created a family-like atmosphere,” Beth said.

Beth Hunt and her family received a call on Mother’s Day saying their mom was showing signs of COVID-19.

“When she started showing signs and had gone down in her health very quickly, we were given the option of taking her to the hospital, or staying where she was familiar, and we chose to stay where she was familiar,” Hunt said. “That proved to be a very valuable choice to have made because everyone knew her there, so they took special care with her throughout.”

Beth Hunt says the long-term facility had plenty of personal protective equipment, and once hospice was involved, she was allowed to go in and visit with her mom. She wore one set of PPE  in and on the way out of her room switched to a new set to walk out of the building in. She also changed her outer shirt before getting in the car.

“I also had to get my temperature taken, on the way in and on the way out,” she explained.

All three siblings agreed only one of them would visit their mom in person to lower the chance of others getting the virus.

“I felt very safe and to date, and I don’t have any symptoms of COVID,” said Hunt.

“There were six cases at the time that she was tested. She was the only one that came out negative,” said Beth Hunt. “We consider it a false-negative. I think post-mortem they have retested her.”

Beth says she has zero doubt this was COVID-19. She says her mom was near the others who tested positive and had the same timeline of the progression of the disease.

“We got the news on a Sunday, and by Tuesday she was coughing and having a hard time breathing.”

The family says the staff at Brookdale Plymouth were incredibly kind and hardworking.

“They are putting themselves on the line every single day they come in,” said Beth Hunt.

Hunt says her mom had a special bond with one staff member and was able to do a Zoom interview with him before her final days. It’s a memory Beth and her family will always treasure. 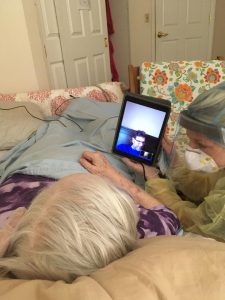 “She had been unresponsive for two days, and he sang her a song, and when it was done, she laughed,” said Hunt.

The family set up a GoFundMe to help her mother’s caretakers at Brookdale Plymouth.

“I want to thank them from my heart. It’s a hard job. They provided day in and day out sparkles, and I wanted to give them a little bit of fireworks,” Hunt said.

The family plans on holding a memorial service at a later date.