His abdication made way for second grader Justin Berg, who won a chance to be Mayor for a Day at a fundraiser for his school. 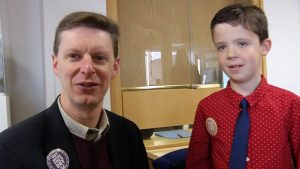 As part of his introduction to city politics, Justin got a tour of City Hall, the police and fire stations, and other city buildings.

And he’s already got a goal for his term as Mayor. Berg says his school’s water heater is broken, and he wants it fixed.

Although his term was only for a day, he’ll reprise his leadership role at next week’s city council meeting, where he’ll lead the chamber in saying the Pledge.